Picture of the Week: Test Fluid in a Decellularized Spinach Leaf

A decellularized, nearly-transparent spinach leaf is used as a model for testing thrombolytics. Such models of plant origin can become the alternative to the use of lab animals as test subjects. 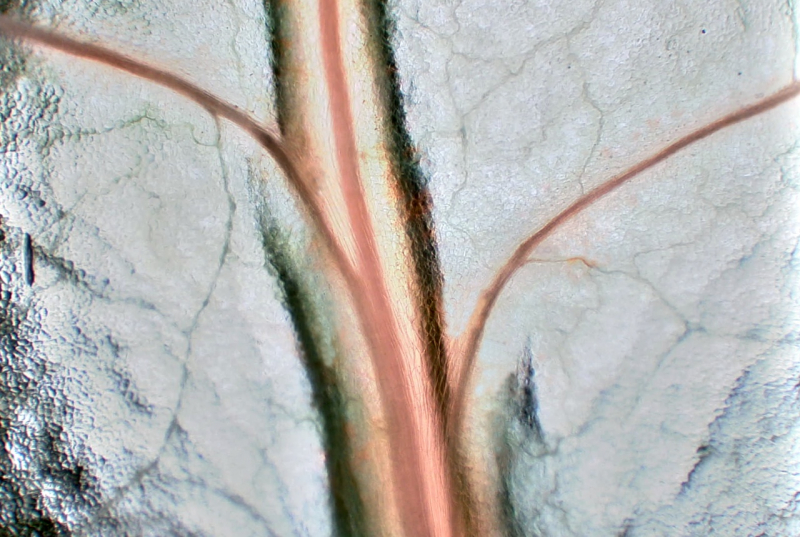 The photo, taken with a 25x zoom lens, shows a transparent spinach leaf injected with a test fluid (a solution of specific viscosity mixed with a colorant). The leaf’s conducting system bears a strong resemblance to the blood circulation system of a human brain in its bifurcation and vessel size. Therefore, it can be used as an experimental model for medical trials. For one, it can be used to model a stroke, specifically the process in which a vessel is clotted by a thrombus.

First, all cellular components are extracted from the plant with the help of sodium chlorite and surfactants while the unique microarchitecture of cellulose cell walls remains intact.

The leaf’s transparency makes it possible to monitor everything that happens on the inside, including the integrity of vessels. For this purpose, a glycerin solution that matches human blood in viscosity and has a contrasting color is injected into the leaf under low pressure. This way, researchers can test the integrity of the leaf’s conducting system and the movement of the solution along the leaf’s veins without ruptures or leaks.

The project is being conducted by Aleksandra Predeina, a second-year Master’s student of the Molecular Biology and Biotechnology program and an engineer on the research team Nanopharmacy, under the guidance of Vladimir Vinogradov. While the results of this project are being prepared for publishing, an article explaining the production of such decellularized materials and their application has already been published in Journal of Materials Chemistry B under the supervision of Marina Dukhinova and Vladimir Vinogradov.