The Results of Workshop Week at SCAMT Lab

SCAMT Workshop Week is a summer school in a unique new format. Over the course of a week, its participants work on one of the six research projects and hone their practical skills. This year’s students have synthesized a nanopharmaceutical drug and magnetic bacteria, printed an optical sensor, built a nanobot and worked on other hi-tech inventions. 40 students were selected from among 200 applicants from Russia and neighboring countries.

At my university, I synthesize composite materials based on derivatives of graphene. When I got an email from the school, I thought it would mean new experience and contacts. Out of the six projects, I immediately went for the one that involved printing an optical sensor, as it’s the closest to what I already do. My own research also involves biosensors, and being here lets me consult with top experts and use modern equipment.

We created ink, for use in the university’s 3D printers, and sensor films with the use of inkjet printing, studied the physics of optical processes in thin films and learned of their use in actual sensor systems. I’d never done anything like this before. 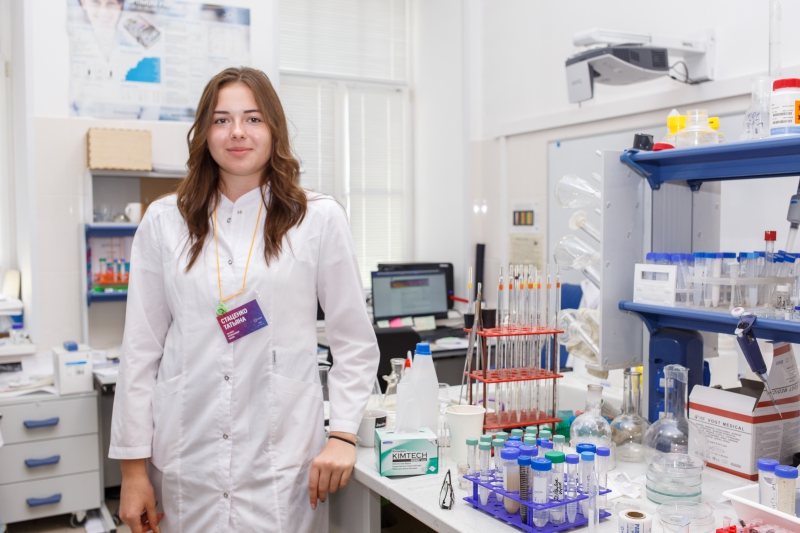 What I especially liked was that the teams got help from the university’s Master’s and PhD students who taught us to use all the equipment. One of the Workshop Week’s biggest advantages is that you can work with expensive cutting-edge equipment. I really liked the research ethic I’ve seen here and I’m thinking of applying here for a Master’s program.

When I first started working with magnetite particles, I took an interest in nanotechnology and studied it independently. Later, I decided that for my second and third year of PhD studies I’d take up a few educational modules in that field. I’ve also heard that ITMO University does research into biomedical nanotechnologies. I’ve always wanted to come here and see how things are set up: what equipment they have, what projects they’re working on. So when I heard about the summer school, I knew that this was my chance.

Our team synthesized a nanostructured drug based on a hybrid organic-inorganic composite, and analyzed its physical and chemical properties, as well as its thrombolytic effects, by using it to treat a blood clot taken from a sample of human plasma. I’ve synthesized magnetite before, but I’ve never used it in such a manner.

I like the people here; we all come from different scientific backgrounds: chemistry, physics, medicine. We all have different levels of training, from Bachelor’s to PhD students. The lectures were also surprisingly interesting. I was already familiar with the theoretical parts, but I learned about new applications of biomedicine. The lecturers shared their own experiences and told us about the current state of science in Russia and abroad. Everyone here is so inspired, it’s contagious. I’m thinking of changing my area of study and getting into nanotechnology, and ITMO University is one of the options that I’m considering.

My research advisor told me about the summer school. I picked the project on the creation of a magnetic bacterium because I liked the combination of biology and chemistry. We worked with bacterial cells, which I’d never done before, so everything we did was novel. In my last semester, I attended a course in molecular biology, and it made me want to try working with the things I learned about. We worked with microorganisms, created bacteria with artificially created magnetotactic properties and learned to manipulate them, as well as use them to create fluorescent paintings using a magnetic field.

I didn’t know much about ITMO University; I had thought it was mostly a programming university and wasn’t aware of the Biochemistry Cluster. Having spent some time here, I can say that it’s a good place for those looking to get into science. I’ve been on internships in German universities and in Cambridge (UK), and the work ethic and equipment at SCAMT Lab are on the same level as in European research labs.

I’m not a fan of spending summer at home, so I searched for summer schools in Russia, where I want to get my Master’s. I was excited to find a summer school at ITMO because SCAMT Lab is known for its equipment and research.

I was on a team that created a DNA nanobot. We created a DNA machine capable of catalytic activity, learned how to design nanobots, and tested a method for detecting DNA pathogens using nanobots. I’ve always wanted to be a bioengineer and I like genetics, but there’s nothing in that area at my university. I want to enroll in a Master’s program in biotechnology or bioengineering, and for me, this summer school is a chance to see if this is the field for me.

I was involved in the project on the creation of a glowing web. We synthesized a hybrid material based on natural spider silk and inorganic, optically-active nanoparticles. At each stage of the study, we analyzed the physical and chemical characteristics of the material. Web is a great natural material and can be used in medicine for stitching wounds. It dissolves in the body, and the reason why we made it glow is that this lets us make sure that it has been dissolved.

I study catalysis and the various reactions. Starting this academic year, I will begin teaching physical chemistry to freshmen and work on several research projects. Right now, I’m actively involved in green chemistry and work on a photocatalysis research project, in which we develop materials that are already seeing use in air purification.

At my lab, I synthesize and produce various substances. There are scientists who make discoveries. To achieve great results, they use equipment, devices, and materials created by other research teams. My lab is the kind that produces tools used to make scientific breakthroughs. At Workshop Week, I went for the project that involved theoretical work, i.e. calculations. I’m used to creating things in my daily work, so I’d like to learn to make precise calculations, which would save me from having to pour out compounds that didn’t synthesize properly. In our project, we studied the methods of creating molecules and crystals.

I decided to continue my further studies, but in Belarus, I’d have to enroll in a Master’s program, while in Russia I can go straight for a PhD. I’ve also been to some European countries but decided to come to Russia since we have similar cultures and mentality, and we speak the same language.