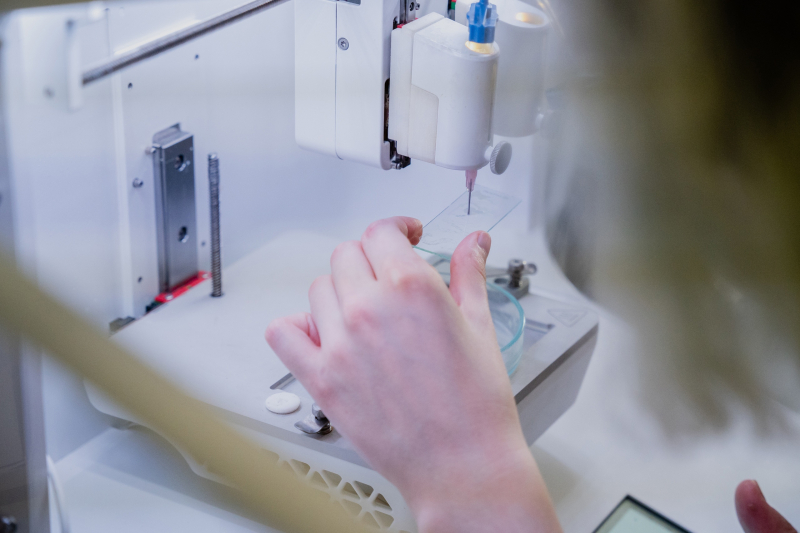 In order to be enrolled at one of 12 possible tracks, applicants had to undergo a strict selection process that assessed their competencies, background, and motivation. This year, one more criterion was added to the table: the school was conducted in English, so all documents, essays, and letters had to be provided in English, too.

Other than the opportunity to work with cutting-edge equipment, obtain new skills in relevant fields of studies, and see how the ChemBio cluster functions, the participants of SWW get the opportunity to join ITMO’s Master’s programs without having to take entrance exams.

The workshop’s projects change every time as research conducted by SCAMT never stops. This time, for instance, the computational chemistry lab has focused on green chemistry, the thrombosis project – on a new approach to clot disruption, and genomics projects were chosen in accordance with the participants’ research interests.

ITMO.NEWS asked this year’s participants of SCAMT Workshop Week to share their thoughts on the school.

Avel Urin, a graduate of Novosibirsk State University, Department of Cytology and Genetics

I found out about SWW from my classmates – they’ve already been here for the winter workshop. They also suggested that ITMO is a good option for getting my Master’s degree. I chose a project in plant genomics. Another project I applied for was also related to genomics but it required skills in programming, working with the command prompt, etc., which I didn’t have. On the other hand, I had some expertise in plants because I’d already worked with them a lot in the past.

Unfortunately, our curator was based in France and all training took place on Zoom, but in general, we’re already used to studying remotely. First, we have extracted reads – short fragments of the sequenced genome of one of the plants. Then we isolated the part that is associated with chloroplasts and marked and identified each gene that was located there. And finally, we had to figure out what to do with this information and how to connect it with the properties of the plant's life and life cycle.

I wouldn’t say I learned a lot of scientific information in particular, as I’d known a lot beforehand but overall, I obtained a lot of new skills. From the point of view of technologies and working methods – everything was very cool and I enjoyed it.

At Moscow State University, I studied microbiology and immunochemistry. In particular, I was engaged in research of black plague antigens for my thesis.

I was looking for a university in which I could get my Master’s degree. I liked it at ITMO: you can get a degree in English and there are a lot of foreigners studying here. Plus, there is also a program in molecular biology.

I applied for a project in which we had to create a model for cancer research. Among the reasons for my choice is the fact that curators of this project work at a lab I would like to be a part of. Before that, I had never had any experience with eukaryotic and cancer cells, only with bacterial ones.

The lab is developing a drug that works very selectively on different cancer cell lines. In order to understand which components are active and which aren't, they chose several analogs of the researched drug. Our task was to determine which of them are active and in what position they bind with a target.

It was hard to achieve that in a week but Erik Gandalipov, our supervisor, explained everything very comprehensively and was helping us throughout the process.

I knew that there were going to be lectures on scientific topics but workshops on public speaking, slides, and presentation structure were a great addition. Plus, we were shown all SCAMT labs. I liked it all very much.

During all three years of my studies, I was a part of the scientific community at the Department of Physiology and Pathology. However, when it comes to projects, they’re not particularly in the focus there, so for my Master's degree, I decided to look for another university where I could do something scientific and practical.

I have been following ITMO and SCAMT since last autumn when I read about them in one of the interuniversity academic communities on social media. In winter, I saw that admission for SWW is open, and submitted my letter of motivation.

At my university, I don’t have any specific scientific work, so I considered projects based on my background and skills. I applied for two projects: one in genetics because this is, in general, a field that is interesting to me and in which I aspire to work, and another in microbial electricity because my skills and my education are more applicable here.

Our project was about the generation of microbial electricity. First, we assembled a standard microbial fuel cell containing two units and observed how it functions in practice. Then, we sowed bacteria from our skin there and detected the approximate electrogenesis. In the last few days, we tried to make the device smaller so that it would be possible to wear it as a bracelet and measure electrogenesis directly on a human. All this is needed for personalized medicine.

Maria Mikheeva, a student at D. Mendeleev University of Chemical Technology of Russia

At my university, I study organic hybrid materials. Mendeleev University cooperates with Skoltech, so we have the opportunity to conduct our own projects from the very first year. In particular, I have already worked with solar panels and lithium-ion batteries.

I saw a post about SWW in the community of our department and decided to try my hand and apply. Initially, I just wanted to participate in some workshops because we haven’t had on-site lab classes for a long time due to coronavirus. I wanted to try my hand at practical work, including new fields of study.

I applied for 3D printing and green chemistry. On one hand, I care about ecological problems, and on the other, 3D printing was closer to what I’m majoring in. As a result, I was admitted for the second track.

Our project was about creating optical active structures using 3D printing. We synthesized polymer latex, from which we then obtained a gel. Using it, we printed structures using a 3D printer. In general, we ended up with quite good results. All the equipment was new to me, I had never worked with it before: neither with fluorescent microscopes, nor a 3D printer, nor a device for taking rheological measurements.

I liked it. The lectures were fascinating and full of useful information. I really enjoyed our workshops on presenting and public speaking. The entire week was full of events.

I’ve been engaged in scientific work since my second year of studies: I research the composition, biological effects, and the way energy drinks and adaptogens influence the physical activity of mice. I learned about the summer school from the mailing list of our  Faculty of Biology community. Earlier, I applied for a winter school but didn’t pass. I decided not to give up and apply until I’m enrolled.

I first heard about ITMO a long time ago from other Belarusian State University students who are engaged in research activities here. I was amazed by the number of possibilities for students and the way they are treated. So I decided to study here and now work on my letter of motivation.

I’ve gone through an internship at JeonBuk National University (South Korea) and worked in a Belmedpreparaty company lab that focuses on biomedicine. That’s what helped me choose a project – “The Creation of a Magnetic Web” became an instant favorite.

I love to overcome challenges, so I chose the project with spiders, even though I’m terrified of them. During the entire week, we worked in the insectarium: we fed the spiders and actively interacted with them. I can say that now there is absolutely no fear. We collected a tarantula web: it’s non-toxic, biocompatible, and biodegradable. Then we treated it with ferromagnetic nanoparticles. This method makes it possible to work with liposomes and, with their help, implement targeted drug delivery and regenerate nerve tissue. Also, this method can be used in the manufacturing of biosensors and various medical materials, such as surgical threads, since the web has high elasticity and resilience.

I absolutely loved being here – I didn’t expect the school to be so well-organized. This was a really intense week and we have really improved our skills. I think everyone has learned something new and will want to continue studying at ITMO, including me.

I learned about SCAMT a year ago when I spent a month and a half on an internship here. I fell in love with this atmosphere and only wanted to get my Master’s degree here. This summer school is one of the ways to get in.

I did an internship at the nanopharmaceutical lab because, at my university, I mostly work with electroluminescent materials, and I wanted to try working with something living and do something useful for people. Therefore, I chose this lab’s project once again.

At first, I was very nervous but when lab staff said that they remembered me, I instantly felt at home. I like the atmosphere and the fact that we’re always engaged in thinking – even during our free time, we solved cases.

For the whole week, we plunged into the study of the metamorphosis of liquid metals. We obtained hollow capsules from a liquid alloy based on galvanic substitution, studied their morphology, the conditions under which they are obtained, and their composition. Such capsules are used for targeted delivery; they can encapsulate an active substance. They can also be used in photonics because they make it possible to amplify a signal.

At my university, I’m engaged in epigenetics and aging research but for this school, I wanted to pick something new. Biophysics sounded interesting to me and I picked a project on nanorobots. Even though later on it turned out that this track is more about chemistry, it was fascinating to work on it. I even considered leaving genetics for an interdisciplinary field.

Our project was about DNA or RNA destruction using DNA structures with certain purposes, such as DNA enzyme therapy or diagnostics.

With curators’ help, we designed experiments and conducted them under their supervision. Of course, it’s not common for labs to allow students to do whatever they want. We spent a lot of time at the lab and stayed there until late evening. The atmosphere was very friendly here; I was proud to be here and be a part of our team.

I loved the university, too. Everything is innovative, progressive, and modern – you can see that they’re doing everything for people’s benefit.

My classmates advised me to apply for SWW, as they’d participated in SCAMT events a lot. I chose 3D printing and photonic image printing projects. They have to do with polymers, which was the topic of my Bachelor’s thesis, so I thought that’s what would be most suitable for me.

The project was about printing pictures using special monomeric ink. Then the pictures underwent the process of polymerization and we would end up with a beautifully colorized hologram. I thought this technology can somehow be applied in medicine but unfortunately, it can’t, at least for now. Maybe if I pursue my Master’s degree here, I’ll come up with a biomedicine project based on it.