Picture of the Week: Spinneret of Linothele Fallax Spider

Various species of spiders use silk from their spinnerets to produce threads for their webs. In science, these threads can serve as a multifunctional natural material for drug delivery and other medical applications. 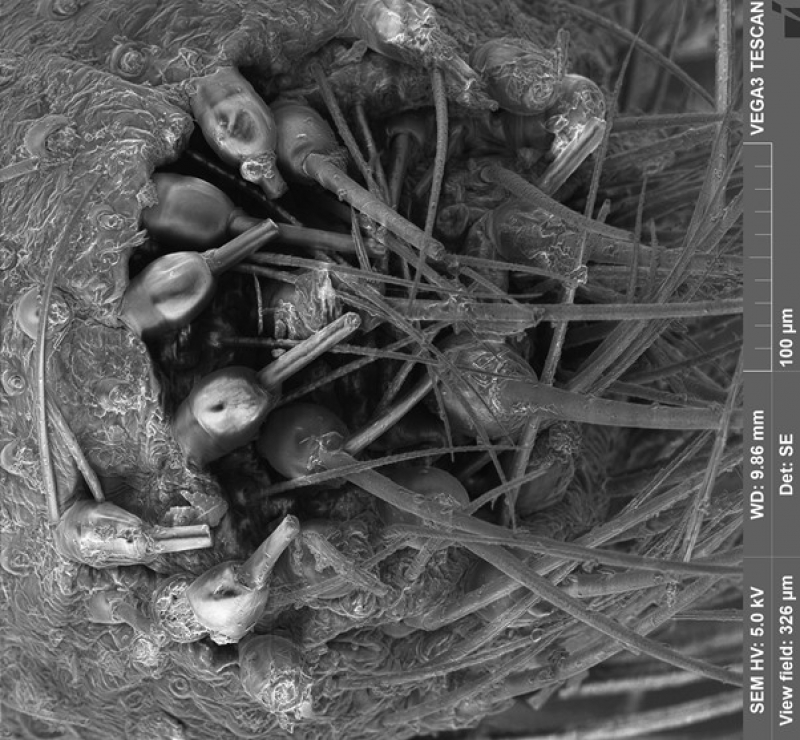 Spider webs are not only one of the signs that you are remiss in cleaning your house but also a protein material with remarkable properties.

Most spiders have several types of glands. They are located in their abdomen under the liver and open onto numerous spinnerets. Although silk is produced as a liquid within the silk glands, it undergoes a series of structural changes due to the influence of various physical and chemical factors.

Spinning tubes are usually situated within small areas of spinnerets. These are called spinning fields. Each tube consists of thicker (basal) and thinner (terminal) segments.

In the process of biosynthesis, spider silk passes through the gland and undergoes many biochemical changes. For instance, it gradually becomes more acidic (its pH goes from 7.2 to 6.3). Also, it is exposed to shearing and elongation, and as a result, its structure changes – spider silk solidifies into fine and smooth threads that are one to ten micrometers in diameter.

As silk passes through the narrowing tubes to the spinneret holes, its protein molecules align and partial crystallization occurs in parallel to the fiber axis. At the last end of the tube, silk settles, and part of the water, which acts as a solvent, evaporates.

ITMO University has its own spider farm with several dozens of species. They produce spider silk, which is then used by researchers at SCAMT Lab to create promising materials for targeted drug delivery.

The picture was taken with a TESCAN VEGA3 scanning electron microscope.