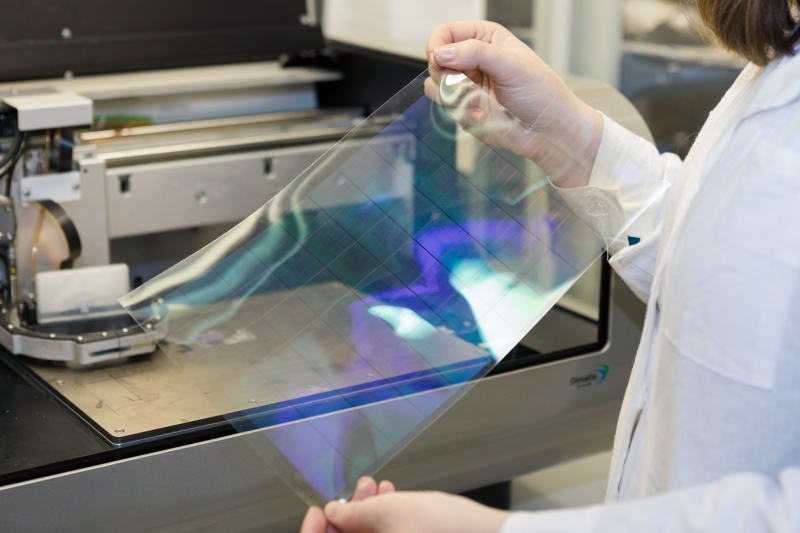 Holography is used in many fields – for instance, in art, data storage, microscopy, as well as in sensors and optoelectronic devices. However, its most common application are various holographic protection methods, for example on documents or bank notes. It’s a constantly expanding market that calls for continuously updating technological solutions. According to some estimates, it takes criminals only about one to two years to get around a specific security measure. That’s why each new commercial solution in this field has to be simple and cheap in order to garner success.

Researchers at ITMO University have proposed a solution that meets both of these criteria and is based on multicomponent acrylate ink. This solution is put on a film that already contains a hologram recorded at the wavelength corresponding to the blue color (488 nm). The ink penetrates the layers of the film, also referred to as the Bragg diffraction grating, causing swelling of these layers, thus changing the grating’s period and light reflection conditions. As a result of this process, the color of the reflected wave changes.

“The film’s material has different thickness and refractive index. Initially, the grating’s period is fit for diffracting a 488-nanometer-long wave, which corresponds to blue light. When we cover the film with ink, the film swells, its layers become wider, and the wave’s diffraction changes accordingly. Depending on the amount of ink we add, firstly we will see a green hologram, then – a yellow one, and if we add more ink, it will turn red. This way depending on the dosage we can create a very smooth gradual change of the image,” explains Tamara Pogosian, the article’s first author.

At the same time, holograms aren’t limited to just four colors – by finely adjusting the amount of ink used and its concentration, researchers can produce fluent multicolor gradients. Currently, scientists are able to produce up to 12 colors but for this purpose they have to employ special printers, where the volume of drops can be controlled up to a picoliter (10-9 ml).

As a result, the researchers created an elegant solution that can be easily introduced in manufacturing. This method is much more simple than any other solution previously produced by SCAMT. Theoretically, such new holograms could be produced by a regular household printer, though with losses in quality, as well as damage to the printer itself.

“Over the six years of its existence, our laboratory has developed several technologies, including opal holography, iridescent and reflected holograms, printing interference images, and computer generated holograms used on many banknotes all over the world. But I believe this new method is the most modern one in terms of the evolution of the field and the achievements of our lab over the years. This method allows us to get a sharp pinpoint image with high color reproduction and precision that is highly reproducible, which allows us to hope this technology will be implemented in practice,” says Alexander Vinogradov, the head of the ChemBio Cluster.

The optical properties and technical quality of the acquired holograms were evaluated with special equipment in collaboration with researchers from ITMO’s Faculty of Physics. Thanks to that, the scientists were able to specify the wavelengths and their reflection angle, as well as confirm that the holographic effect is due to changes in the film’s diffraction properties and not the film’s coloring.

Soon, the ink is expected to be applied in commercial production, for instance, by the Krypten company. However, the researchers are going to continue modifying the solution and experimenting with the film:

“We physically change the layers of the initial material by stretching them, which has an effect on their diffraction ability. So far, we’ve been working with a particular kind of film, the one supplied by our partner, but actually there are many different kinds of them. It’s possible that in different materials the layers will be held together more tightly and won’t be as affected by swelling, which would allow the produced image to retain its brightness. This also depends on the way the original material is susceptible to the ink solution,” adds Tamara Pogosian.