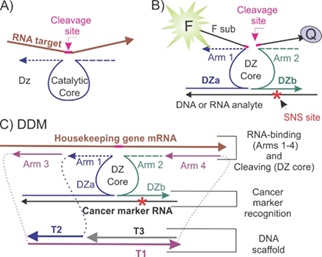 Despite decades of effort, gene therapy (GT) has failed to deliver clinically significant anticancer treatment, owing in part to low selectivity, low efficiency, and poor accessibility of folded RNA targets. Herein, we propose to solve these common problems of GT agents by using a DNA nanotechnology approach. We designed a deoxyribozyme-based DNA machine that can i) recognize the sequence of a cancer biomarker with high selectivity, ii) tightly bind a structured fragment of a housekeeping gene mRNA, and iii) cleave it with efficiency greater than that of a traditional DZ-based cleaving agent. An important advantage of the DNA nanomachine over other gene therapy approaches (antisense, siRNA, and CRISPR/cas) is its ability to cleave a housekeeping gene mRNA after being activated by a cancer marker RNA, which can potentially increase the efficiency of anticancer gene therapy. The DNA machine could become a prototype platform for a new type of anticancer GT agent.