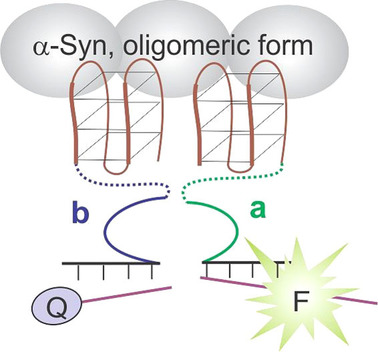 The core of it all: Each DNA strand a and b consists of a full α‐synuclein (α‐syn)‐binding aptamer and one‐half of the catalytic core of an RNA‐cleaving deoxyribozyme that is able to report fluorescently only the oligomeric form of α‐syn but not its monomeric form.

Aptameric sensors can bind molecular targets and produce output signals, a phenomenon that is used in bioassays. In some cases, it is important to distinguish between monomeric and oligomeric forms of a target. Here, we propose a strategy to convert a monomer/oligomer‐nonselective sensor into an oligomer‐selective sensor. We designed an aptazyme that produced a high fluorescent output in the presence of oligomeric α‐synuclein (a molecular marker of Parkinson's disease) but not its monomeric form. The strategy is potentially useful in the design of point‐of‐care tests for the diagnosis of neurodegenerative diseases.