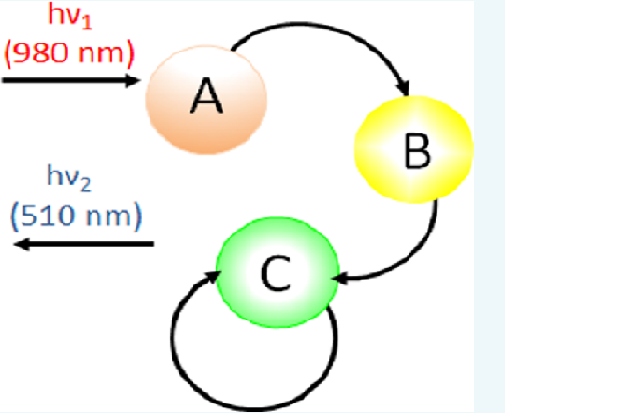 The development of stimuli-responsive nanocontainers is an issue of prime importance for many applications such as target drug delivery, regulation of the cell and tissue's behaviour, make bacteria do useful functions, here convert light. The present work shows a new contribution to the design of polyelectrolyte (PE) containers based on surface modified mesoporous titania particles with deposited Ag nanoparticles to have chemical light upconversion via biofilms. The PE shell allows to slow down the kinetics of a release of loaded L-arabinose and switch the bacteria luminescence in a certain time. The hybrid TiO2/Ag/PE containers activated at 980 nm (IR) illumination reveal 10 times faster release of L-arabinose vs non-activated containers. Fast IR-released L-arabinose switch bacteria fluorescence which we monitor at 510 nm. The approach described herein can be used in many applications where the target and delayed switching and light upconversion is required.