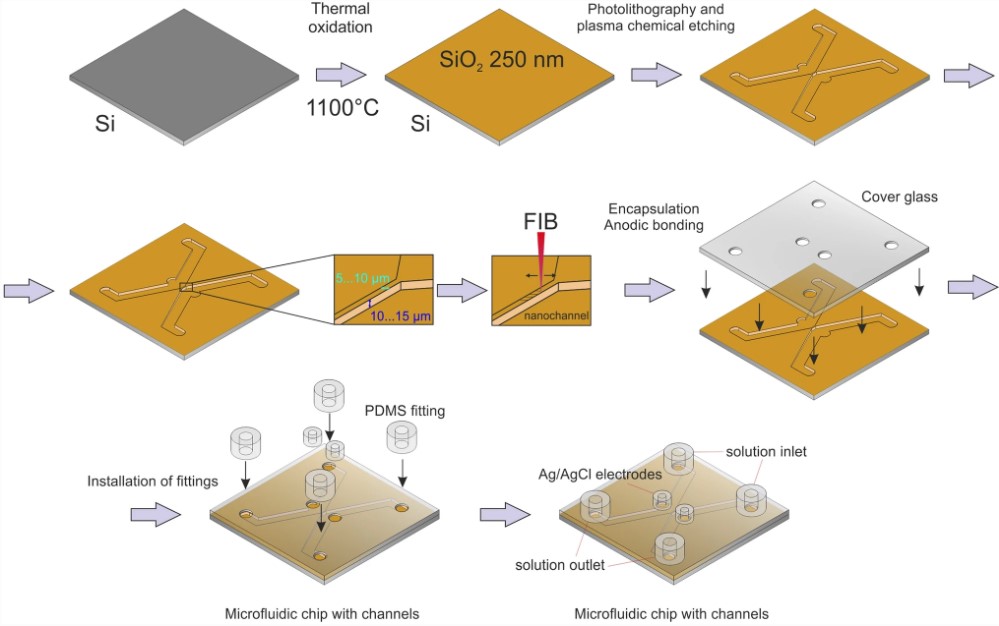 Nowadays nanofluidic devices have a great potential in biosensing and DNA sequencing applications. This work is aimed at development of the technique for fabrication of arrays of nanochannels in silicon-glass chips by focused ion beam milling. The use of lithography with charged particles (electrons and ions) paves the way for the fabrication of micro- and nanochannels and pores as well as functional nanostructures of a more complex shape in nanofluidic devices. In this study, a technique for fabrication of microfluidic chips with a system of nanochannels connecting two independent volumes (2 half cells) was developed. It was shown experimentally that the focused ion beam etching time has an influence on both the width of the created nanochannels and their depth. We suggested using anodic bonding of a silicon wafer with the net of micro- and nanochannels with a glass plate for encapsulation of such devices that provide their long lifetime of microfluidic devices. To determine the functionality of the produced devices we studied the ionic conductivity of the produced nanochannels experimentally and using a theoretical approach. Analyzing the results, we determined the effective diameter of the nanochannels and the surface charge density inside the channel which were 20 nm and 1.5 mC/m22, respectively. The proposed technique allows to create ensembles of channels with a predefined width and depth. Such systems can find wide application in studies of the transport phenomena of both ions and various molecules in nanofluidic devices.