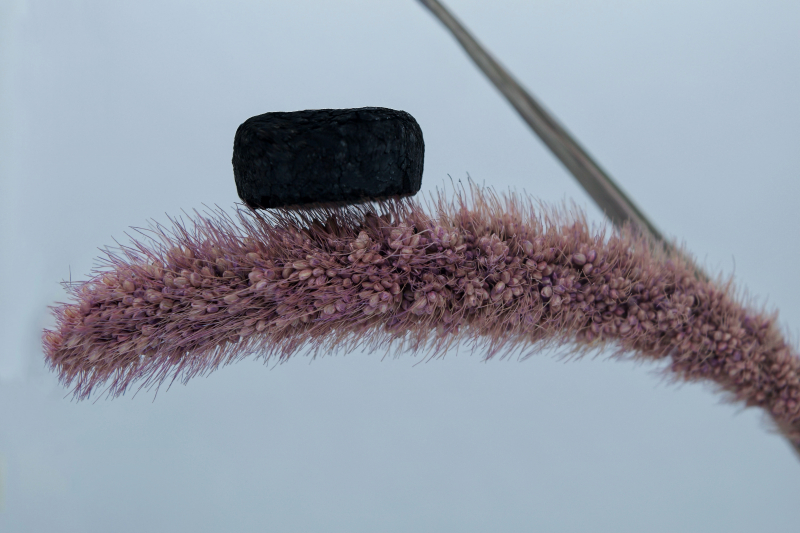 Sample of the synthesized magnetite aerogel. Photo courtesy of the scientists

About the research project

Magnetic gels can serve many different properties because of their variety – for instance, in biomedicine they are the base of biosensors and in chemistry they serve as catalysts. The use of a materialdepend on its properties, which, in turn, are determined by its structure. However, currently there aren’t many systematic approaches that would make it possible to synthesize materials with different structures and a wide spectrum of textural and functional properties.

ITMO University’s researchers have demonstrated an approach that allowed them to control the necessary parameters during synthesis and, as a result, acquire materials with various porosity and, by extension, properties. In particular, the scientists produced xero-, cryo-, and aerogel from magnetite nanoparticles. The resulting hierarchically porous magnetic objects were demonstrated to have hemostatic (or blood-stopping) capacities.

“First, we produced magnetite nanoparticles and then by changing such parameters as concentration and viscosity we were able to create more complex materials with a different hierarchy seen in their density, structure, and internal architecture. This way we have demonstrated that using nanoparticles to produce porous monolithic structures allows us to get multifunctional materials with different nanoarchitectures,” explains Elizaveta Anastasova, a lead engineer at ITMO’s ChemBio Cluster.

In this work, the researchers used the traditional sol-gel method, where the first task was producing the sol – the state when nanoparticles are evenly spread in water (hydrosol), they do not settle down and the system is stable. The next task was to bring the acquired hydrosol into other forms. Hydrogel came first; it’s a dense material characterized by nanoparticles being closely linked to each other with each pore containing water.

In order to produce xerogel, the researchers dried the hydrogel at room temperature. During this process, water left the pores making them collapse, which made the material thicker. Finally, cryogel was acquired through lyophilization – another drying method where the liquid froze before evaporating from the pores.

Aerogel is a more structured material. In order to produce it, the liquid contained in the pores had to first be replaced by a more volatile solvent – in this case, acetone. After two weeks of doing this, the acquired sample was heated under pressure with the supercritical drying method to reach the critical temperature of acetone. This way, the solvent left the gel without decreasing the material’s volume. All in all, this method allowed the scientists to preserve the initial structure of the object, which wasn’t possible for xero- and cryogels.

The researchers have also theoretically explored the percolation threshold of the sol-gel transition and were able to identify the concentration ranges necessary to produce the targeted porous objects. All three types of magnetite – xero, cryo-, and aerogel – were produced at this threshold point.

The percolation threshold is a state, when the material suddenly starts to demonstrate different properties. In this case, the researchers discovered that due to the increase in the volume of nanoparticles and the weak attraction between them the sol-gel transition is characterized by constantly growing structures. Such a network of large structures is a second order phase transition, when the critical point is the moment when liquid turns into a solid during sol-gel transition.

“Nanoparticle concentration plays an important role in determining the sol-gel transition mechanism; that’s why we measured the viscosity of different concentrations of our sols. By comparing our data to theoretical models we were able to explain the formation of a continuous network of nanoparticles that leads to new rheological (deformational – Ed.) properties,” adds Elizaveta Anastasova.

Being able to control the composition of porous materials means also defining their properties. For instance, the high porosity of aerogel makes it possible to use it as a hemostatic material, while xerogel can serve as a repository for drug transportation.

In order to demonstrate that the acquired materials can be applied in medicine, the researchers evaluated their toxicity for cell cultures. All tested samples proved to be biocompatible.

“Our approach provides many opportunities for developing porous magnetite monoliths with predefined structural features and thus significantly expands the functional capacities of these promising materials. I hope that our work will be an impetus for further research in predicting and describing properties of other materials,” concludes Elizaveta Anastasova.