In the fall of 2019, Aleksandra Predeina, then a first-year Master’s student at ITMO came to Vladimir Vinogradov, head of ITMO’s SCAMT Institute and expressed a desire to make an art & science research project. Two and a half years later, this collaboration has resulted in a unique testing system for nanopharmaceuticals that will make it possible to significantly cut down on animal testing. Read on to learn all about the scientific breakthrough born from a passion for art. 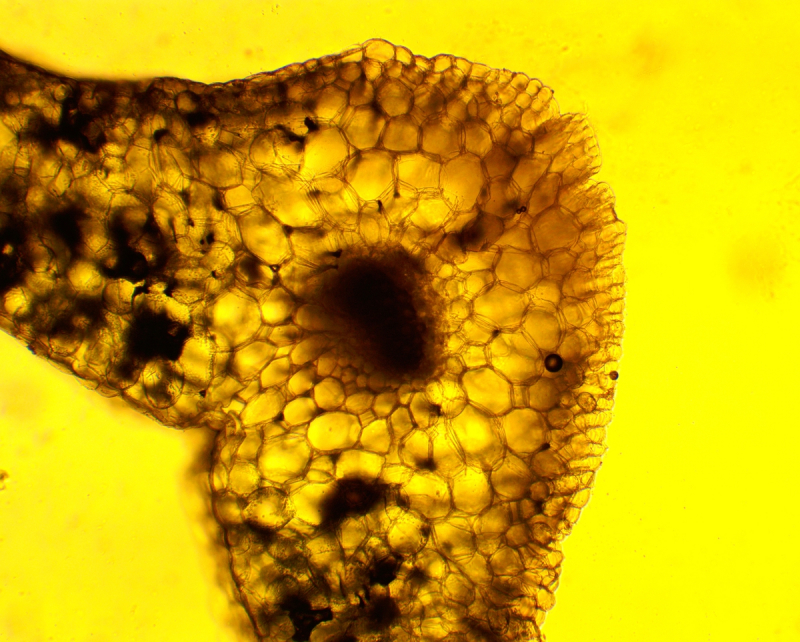 A vertical section of the main fibre of a spinach leaf as seen through an optical microscope. Image courtesy of Aleksandra Predeina

Nanostructured treatments have a number of advantages compared to molecular drugs: they can ensure targeted drug delivery, as well as maintain the stability of the delivered drug on the way to its destination. This way, a minimal dose can provide a greater therapeutic effect.

Models for testing nanopharmaceutical treatments have to represent the body part or system targeted by the treatment, such as the cardiovascular system, while also being transparent to make it possible to monitor the treatment in action.

However, it’s not an easy task to find an effective model for preclinical testing – and that poses a problem for the development of new nanopharmaceutical treatments. Traditionally, cell or tissue cultures are used for such experiments. They are cheap and easily reproducible, but they cannot mimic the true complexity of a living organism. Part of the testing can be done with computational models, but these are insufficient without experimental follow-ups.

Some researchers also suggest employing microfluidic chips that can imitate the cardiovascular system with the channels that can be etched into them. However, these chips are far from actual biological objects in terms of their composition and physical parameters. Moreover, they require long and costly preparation and carry a risk of delivering imprecise research results.

“Despite the potential of nanopharmaceutics, as well as a great number of publications and preclinical trials, there still aren’t enough cases of these treatments seeing any practical application. These days, there is an extremely high demand for testing models that could imitate trials on live organisms. Any attempt at moving to a new model brings us closer to a breakthrough and helps spare the lives of a great number of lab animals,” explains Vladimir Vinogradov, a co-author of the article and professor at ITMO’s ChemBio cluster.

Taking into account the drawbacks of traditional models, scientists at ITMO’s SCAMT Institute developed a model based on a spinach leaf  (Spinacia oleracea). At its core is the leaf’s vasculature with all cell components removed apart from the cell walls. Thus, the model consists of cellulose, a substance that makes plant tissue more mechanically durable and stable in shape compared to that of animals.

“We’ve also run experiments on other plants with more branched vasculatures. The problem with those was that they are decellularized in harsher conditions, which still doesn’t give us the necessary level of transparency and at the same time rids the leaves of their flexibility and scaffolds,” adds Vladimir Vinogradov.

The resulting model is comparable to the arterioles and capillaries of the human brain in terms of their branching and diameter. This feature combined with the material’s affordability will make it possible to use the model to test both traditional and nanopharmaceutical treatments.

“Plant and human vasculatures follow the same principle (Murray's law) and are morphologically similar. They are both essentially complex networks of different-sized channels. That’s why it was important for us to produce leaf scaffolds with their vasculature intact. That way, we’d get experiments that would be highly reproducible and simultaneously cheap,” says Aleksandra Predeina, a co-author of the article and a researcher at ITMO’s Faculty of Biotechnologies.

In order to illustrate the new model’s efficiency, the researchers decided to model thrombosis, a disease that is one of the most frequent causes of death worldwide. To this aim, they created a model thrombus and inserted it into the vasculature. Then, loaded nanoparticles were magnetically guided into the blocked area in order to dissolve the thrombus.

“It’s important to keep in mind that experiments are often conducted on living organisms, often resulting in their deaths. Plants, on the other hand, do not feel pain and seem a more humane experimental model. Moreover, they present us with quite a diversity – depending on the therapeutic function you’d like to perform, you can choose different plant objects to imitate various systems. Thanks to evolution, we actually have a lot of choices here,” concludes Vladimir Vinogradov.

The next step of the project will be to plant actual human cells into the cellulose scaffold to make the system an even more realistic imitation of the human vasculature.

“I want to go even further and attract the attention of the scientific community to the problem of irrational usage of laboratory animals. Currently, you only have to test a new substance on cell cultures before proceeding with animal trials. I think this is wrong – we need another stage in between these two which would identify flaws and provide room for improvement in drugs, thus saving the lives of many animals. Maybe plant-based models will serve as this middle stage,” says Aleksandra Predeina.

This interdisciplinary project brings together several seemingly irreconcilable fields. It gets inspiration and solutions from nature and applies them to the demands of people – while at the same time saving the lives of lab animals.

“I think I’d made quite an impression when, at the first meeting of our research group, I brought up E. chromi as an example for what I would love to be doing. Since then, I've been seen as something of an artist and initiated a project in the same vein. It is rather creative at its heart: we take everything out of a leaf and start with a “blank page.” My work required quite a lot of elbow grease, as I had to assemble the system again and again to make it work, constantly adjusting something and trying a million different approaches,” says Aleksandra Predeina.

This aesthetic-focused approach to research, according to the authors of the project, is bound to attract a wider audience to the scientific problems in question and makes the whole experiment more accessible and interesting to the public.

“I’ve always loved art, especially in its visual forms. During my Master’s studies I realized that I’m also into science and I can perfectly combine both of these passions – especially when they have an actual and highly useful application,” concludes Aleksandra.

This study was conducted with support from the Russian Science Foundation.