Researchers have created drug delivery systems based on hollow calcium carbonate particles, resembling the E. coli K12 bacterium in shape. This approach may potentially allow further development of carriers that can be perceived by pathogens as their own cells, integrate into bacterial biofilms, and release a therapeutic agent in a controlled manner, when necessary. 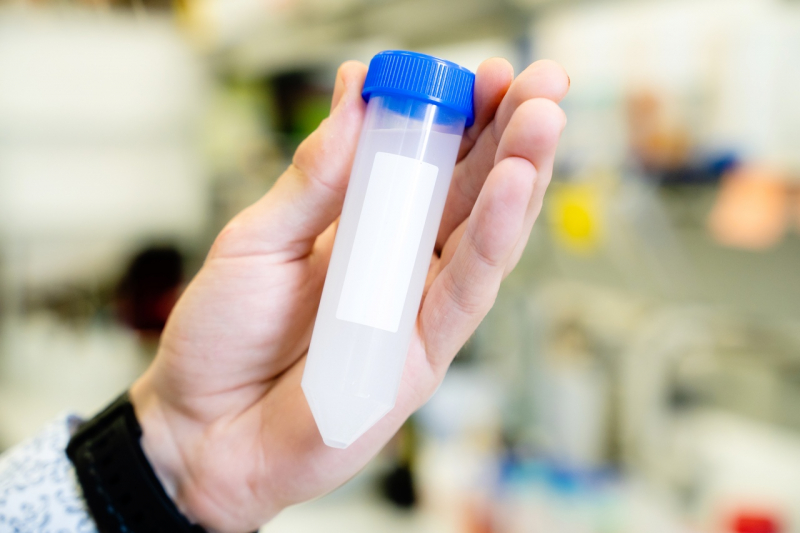 The scientists’ work is published in the Chemical Communications journal, which is part of the Nature Index.

Calcium carbonate is a relatively simple and well-known substance – it can be found in chalk, limestone, and eggshells. It also is known as a white food color (E170). In pharmacies, you can find a lot of biological supplements with this substance.

“We are developing material for a specific task, namely, for combating bacterial infections,” says Nikita Serov, an engineer of the ChemBio Cluster and a PhD student at ITMO University. Calcium carbonate is an affordable and experimentally tested material, you can buy it at any chemical store. Besides, it is very biocompatible. If we remember what elements are present in our blood and other biological fluids, then we will understand that calcium is one of the most represented ions: it participates in the transmission of nerve impulses and muscle contraction. At the same time, carbonate ions generated by the interaction of water with dissolved carbon dioxide, when interacting with calcium ions, produce the material we already know. For this reason, calcium carbonate is known by our body, and for a very long time”.

However, it is not enough to just find a cheap and biocompatible material to make a “carrier” for antibiotics or other drugs. It is necessary to make sure that the substance reliably remains intact until it reaches the goal, and, on the contrary, is easily “unloaded” when reaching its destination.

In human blood, the substance will have to interact with immune cells, which will try to get rid of a foreign object that has entered the body. To counter this, the developers had to analyze and find the ideal shape and size of the “carrier”.

“Numerous works have shown that the shape of an object determines how immune cells will react to it,” explains Nikita Serov. “Our object, for example, has a very large surface area. So that immune cells could successfully attack an object, they need to enfold it. The large area does not allow them to do this – as a result, the immune response becomes weaker and there is no destruction of the capsule or side effects”.

The microcapsule is approximately five micrometers in length and similar in shape to that of bacteria, which is partly what inspired the researchers when developing the material. It can circulate freely through the blood vessels to the infected spot, protecting the antibiotic under a relatively thick coating of calcium carbonate. However, when arriving at the site of inflammation, the capsule can quickly start working. The fact is that many bacteria prefer to locally acidify the environment around them. Faced with increased acidity, the water-insoluble capsule starts to rapidly disintegrate, instantly releasing the drug.

“It is enough to dissolve the wall of the particles a bit to release the contents, creating large local concentrations of the therapeutic substance. Usually, such constructions must completely dissolve for the entire drug to be released,” adds Nikita Serov.

Antibiotic with no antibiotic

So far, antibiotic experiments have been conducted in test tubes. The efficacy of the substance was tested on live bacteria. Now, research continues: in particular, scientists are trying to create a special coating that will allow the capsule to selectively adhere to bacteria and more actively accumulate in the colonies they form, called biofilms. One of the main study objectives is the fight against these very biofilms.

As the scientists note, this is only the first stage of work. In the future, they plan to develop a capsule for the targeted delivery of an antibacterial agent that does not contain an antibiotic. It is supposed to deliver a substance to the biofilm that will not allow it to grow – after the end of the life cycle of bacteria already existing at the site of inflammation, this should lead to recovery.

“Since antibiotic-resistant strains exist and are constantly being formed, we should eliminate the use of antibiotics,” explains Nikita Serov. “There are molecules that prevent bacteria from “communicating” with each other. By disrupting this “communication”, they prevent bacteria from forming biofilms, which are a major problem at the site of inflammation. We plan to use them in future studies”.