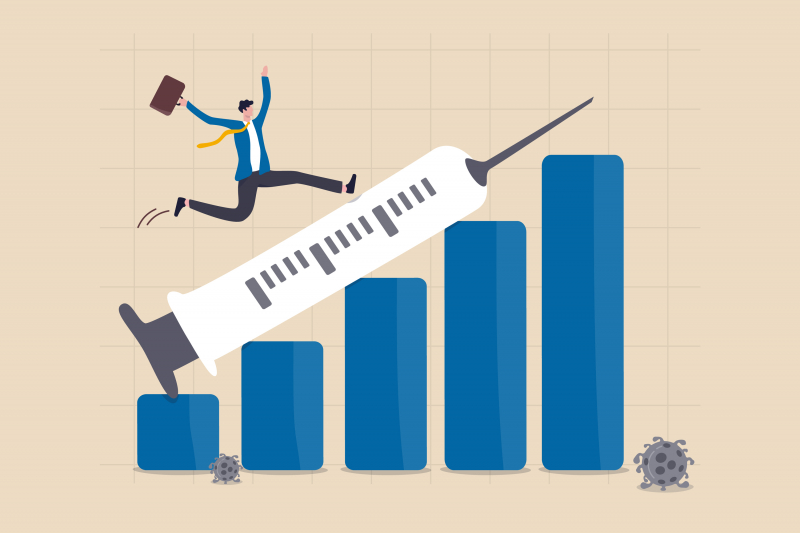 When we talk about life sciences in the context of technologies and services, we not only mean medicine and healthcare but also many other, less obvious economic sectors. That includes food technology, agrotechnology, biotechnologies, alternative energy, a growing market of wellness services and products, a large market of veterinary and animal products, IT technologies, new revolutionary methods of data storage, and many more.

About one-third of all venture investments worldwide goes to the field of life sciences. Despite the financial crises of recent years, this market grows exponentially and is breaking records of investment profitability. Anton Gopka, dean of ITMO University’s Faculty of Technological Management and Innovations, discussed it at the open lecture.

During the past year, the NASDAQ index of healthcare and biotech companies grew by 52% – even more than that of IT companies, which grew by 42%, even though the IT market is one of the main beneficiaries of the pandemic. A record-breaking number of companies related to biotechnologies reached IPO (initial public offering – Ed.) stage in the past year and a record-breaking amount of investments was received by this field – more than $20 billion in the US alone.

But you might ask: isn’t it just a bubble? Why is it suddenly so popular? The thing is, in the past decades, the number of elderly people has been growing, especially in developed countries. Soon, the number of people over the age of 60 will reach more than one billion. At the same time, these people are active consumers who have money and are ready to invest in their health. Also, you can’t but notice the growing interest in mental health and the wellness industry – this market grows exponentially, too.

New knowledge and new technologies in the field of life sciences allow us to develop amazing solutions. For example, the company Iridia uses new achievements in the field of molecular chemistry and semiconductor technologies to create a way to encrypt and store data in DNA bits. At the same time, Elon Musk’s company Neuralink develops neural interfaces to connect humans and computers. The number of such endeavors continues to grow.

Impact of the pandemic

The pandemic is a challenge for healthcare systems worldwide. Before it, the US was considered to be the best-prepared for a crisis, but has now ended up having the highest death rate. According to the International Monetary Fund’s evaluations, the global economy has lost more than $22 trillion.

The pandemic turned the market upside down and changed all of its key players’ approach to business processes. Global corporations are now taking sustainable growth seriously and are ready to invest in it.

The entire world has made a huge leap when it comes to digitalization. For example, the field of medicine was gradually leaning towards digitalization during the past few years. But in the first months of the pandemic, 40% of doctor’s appointments in the US took place remotely via telehealth tools.

Irreversible changes, which until recently seemed impossible, were taking place right before our eyes. We watched scientists race to create a vaccine in an unthinkable time frame: the first vaccine was developed in just nine months and went into clinical testing almost immediately. Usually, the development of a new drug takes at least ten years. The requirements for vaccines are even stricter, as it’s assumed that they will be used by millions of people. Until now, this “record” was held by the Ebola vaccine – and yet it took five years to develop it.

The race was won not by the pharmaceutical giants, as one would expect, but by small companies and university research groups. Oxford University, which sold 2.6 billion doses of vaccines, as well as the American outsider Novavax (with 1.3 billion doses sold) earned the most. Before the pandemic, Novavax was on the verge of bankruptcy.

The technology of vaccine development itself was another revolutionary feature. The conventional method uses an inactivated virus to create a vaccine – this is the oldest and most tested method. Potentially, it could’ve been the most effective remedy for mutated forms of the virus, but there are many problems with it: you can only work with such vaccines in special conditions at a high level of biosafety, which limits the scale of production and transportation.

New coronavirus vaccines use platform technologies: a gene with a “spike” protein (which the virus uses to penetrate a human cell) is inserted into a ready-made platform (nanoparticle). Then, it enters the nucleus of a human cell and prompts it to produce antibodies and T cells. It used to be a completely untested technology, but was suddenly put into mass testing during the pandemic. No one expected it to be 95% effective.

A major breakthrough also took place in the digitalization of medicine, biotechnologies, and pharmaceutics, as well as the use of artificial intelligence (AI) in these fields.

Thanks to the development of bioinformatics, genomics, and new materials, medical research is moving towards well-controlled and predictive engineering mechanisms. Now, we understand how the DNA works better – it turns out that from a bioengineering point of view, it’s quite simple: you can basically work with genetic information as if with a regular set of data and digits.

We can now see and understand how exactly this or that product or drug affects the body. We can develop targeted drug delivery mechanisms and work with targets. We can use artificial intelligence and machine learning tools for drug development and diagnostics.

Gene therapy methods are now one of the key global trends in medicine. They can be divided into three types: ex-vivo, in-vivo, and RNA technologies. The first type is cellular immunotherapy, which is now increasingly used to fight cancer. Blood cells are taken from the patient, then activated – converted into T cells – and returned back to the patient's body, where they fight the tumor from the inside. It should be mentioned that this is the first approved gene therapy method in the world – the leaders of this field, Juno Therapeutics and Kite Pharma, obtained approval for it in 2017.

In-vivo therapy is transformational therapy based on the CRISPR gene-editing platform. This technology has raised a lot of controversy and doubts, because gene-editing operations are irreversible, and it’s not entirely clear how it should be seen from an ethical point of view. At the same time, despite the fact that CRISPR Therapeutics has no sales and can’t have any at this point, over the past year its NASDAQ index has grown by almost 200% – the company is now worth $12.4 billion.

RNA technologies have been actively used in the development of vaccines against the coronavirus. Simply put, the method involves blocking a part of the RNA that is responsible for the production of specific proteins. This is basically like turning certain genes on and off. At the same time, the process is reversible, unlike gene therapy technologies. The company Moderna, which has been working on such technologies since 2010, has grown eightfold during the pandemic and is now worth $63 billion, thanks to the fact that it was able to develop a vaccine officially approved by the European Commission.

Another very promising field associated with genetic research is synthetic biology – the creation of new living organisms from scratch or editing the genome of existing ones. For example, the company Precigen has been able to breed mosquitoes that cannot transmit malaria, and Synthetic Genomics has learned to grow additional organs in pigs’ bodies for transplantation.

Digitalization is being actively implemented in diagnostics and drug development. The company Grail is working on a way to detect cancer at its earliest stages using artificial intelligence. The company Schrodinger is building an AI-powered chemical modeling platform that allows researchers to study molecules and create new ones more quickly and efficiently.

Digital therapeutics has also been developing recently. The term encompasses various non-invasive solutions, primarily mobile apps, that help fight diseases through behavior correction. For example, Pear Therapeutics helps people cope with alcohol or drug addiction. This company is funded by the state budget and its app can be prescribed by a doctor. Another example are games by AKILI Interactive, which have proven their efficiency in treating attention deficit hyperactivity disorder (ADHD) in children.

Ekaterina Skorb, head of the Infochemistry Scientific Center, talked about machine learning methods used in chemistry. In particular, she presented an invention of the center – rapid-functioning sensor systems for point-of-care diagnostics.

In general, infochemistry is a fundamental experimental field that studies the possibility of recording and storing information at the molecular level, as well as robotization and digitalization in chemical technologies. At ITMO's Infochemistry Scientific Center, the main focus is on complex systems and the ways to control them and predict their behavior mathematically. Fundamental knowledge of the structure and behavior of such systems, as well as new engineering capabilities, allow researchers to create affordable diagnostic devices of a new generation.

The BioITMO express test is unique because it can simultaneously determine the antigen, the antibody, and the two of them together, which gives us information about the stage of the disease with an accuracy of 93%. Machine learning helped to create such a solution, and the samples were provided by the Chumakov Federal Scientific Center for Research and Development of Immune-and-Biological Products.

Initially, the platform was developed for the detection of tick-borne encephalitis, but its versatility allows the system to be adapted for almost any type of virus.

Elena Koshel, an associate professor at ITMO University’s ChemBio cluster and head of SCAMT’s Microbiology group, spoke about how methods of bioinformatics and genomic studies of coronavirus are important in identifying its mutations, their spread across the world, and the clinical picture that each of these mutations gives. Thus, SCAMT’s Applied Genomics group has developed a unique pipeline that can simultaneously analyze a huge number of genomes from different databases. This made it possible to identify 19 unique mutations of coronavirus that are common in Russia and also find an approach to the filtration of false-positive mutations in the coronavirus genome.

Together with the company Auriga, a web service was developed to track scientific publications on specific mutations, and a special filter was created to eliminate variants of the virus genome that are found in a single copy and aren’t valuable for research.

Elena Koshel also talked about the unique technology of DNA robots and how they’re used in diagnostics. You can read more about them in our article.