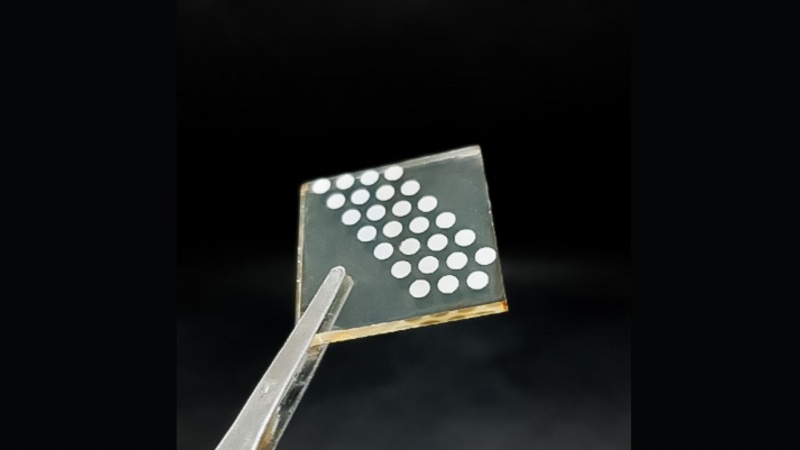 A prototype of a magnetite-based memristor. Photo courtesy of Maria Mikhailova

What are magnetite nanoparticles and how they’re made

Magnetite nanoparticles are extremely miniscule particles consisting of iron and oxygen; their properties differ from that of bigger pieces of the same material. Their nanoscale size endows them with powerful magnetic properties and shape-memory effect.

“The novelty of our research is that we’ve learned how to use chemical methods to produce various phases of iron oxide. The conditions (temperature, time, heat-up rate) remain the same, we only change the alcohol type or water contents in order for the particles to exhibit different properties,” says Maria Mikhailova, an engineer at SCAMT.

Origins of the method

The scientists studied various methods of synthesis involving polyatomic alcohols. For their project, they decided to choose simpler alcohols, such as ethanol and propanol; the goal was to increase magnetite’s biocompatibility with cells of the human body and produce miniscule crystals of the material.

One of the experiments resulted in the creation of nanoparticles, but for a period of time the researchers were unable to reproduce the synthesis. It was later found that the secret was in the pre-experiment treatment of lab equipment, precursors, and alcohols – including the removal of humidity, recrystallization, and the substitution of air for argon. This preprocessing affected the end result. That is when the researchers realized that minor deviations from the conditions of the initial synthesis could be used to produce various, controlled phases of the material.

In other studies on this subject, researchers typically used oleic acids or ethers to stop the growth of particles at a needed stage. But this solution has a strong effect on the particles’ biocompatibility. One advantage of the new synthetic method developed by researchers from ITMO is that all of the reactions involve simple substances and result in a clean crystalline product that doesn’t require ultrasound processing.

Magnetite nanoparticles are used to manufacture prototypes of memristor devices. These devices imitate synapses – the connections between neurons of the human brain. This synthetic material can transmit signals, “remember” them, and retransmit them back.

“Our type of synthesis is more suitable for laboratory research, as it allows us to produce various phases of the material by simply changing the alcohol type. It would be difficult to scale it up for industrial use, as that usually involves physical methods rather than chemical ones, like in our case,” explains Maria Mikhailova.

In the future, the researchers hope to be able to directly influence skin cells using memristor devices that would transmit phases of current at certain intervals – simply put, to establish a connection between an electronic device and a living organism. This technology could be used in the production of healing-accelerating bindings. In addition, memristor devices could be used in the treatment of neurocognitive diseases, such as Alzheimer’s, by restoring brain function.