Even though medicine has made huge strides in recent years, around 10-20% of all patients still fall victim to infection-related postoperative complications caused by sterilization issues or overly resistant bacteria in hospitals. Since infection sites are typically hard to detect, researchers from ITMO’s SCAMT Institute have created a new suture material that will make it possible to track the spread of infection in real time. 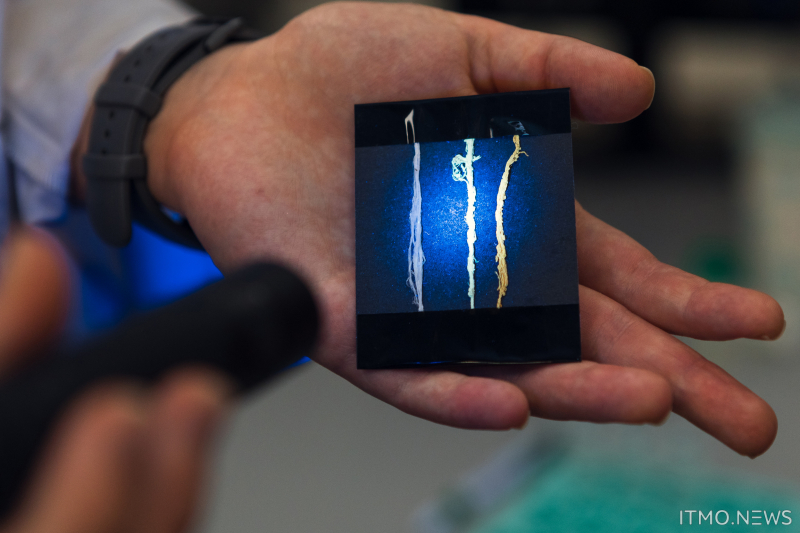 Samples of spider silk with nanodots (on the right) and without them (on the left). Photo by Dmitry Grigoryev / ITMO.NEWS

The developed multifunctional material consists of two components: a frame (made with spider silk) and a filler (carbon dots). Spider silk has long been known for its spectacular mechanical and biological properties. In ancient times, people widely used it to make wounds heal faster and even today, this natural material is still around in medicine, for instance, in eye surgery. Carbon dots, on the contrary, are a relatively new type of nanomaterial that emits light at certain wavelengths and can be easily synthesized. Apart from its structure, the new technology exhibits sustainable biocompatibility and biodegradability, meaning that stitches made of this material are harmless and naturally decompose in the human body.

To obtain the material, the scientists increased the number of carbon dots on the surface of the web by mixing spider silk with a modifying substance. After that, the reaction mixture was placed in an autoclave at 140°C for 6 hours before it could be washed.

“We experimented with different temperatures and reaction times before discovering the right conditions that would result in a material with the required fluorescence properties. As it turned out, the synthesis boosts the growth of carbon dots not only on the web’s surface but in in the reaction mixture, too, which should provide groundwork for further studies,” says Elizaveta Maltseva, the first author of the paper and a second-year Master’s student at SCAMT Institute.

Knowing that human tissue can emit light (mostly at wavelengths of blue light), the scientists had to develop carbon dots that would fluoresce at the red end of the spectrum (around 600 nm) and thus produce a visible signal not affected by natural radiation.

Some fluorescent substances cease to glow when exposed to certain organic or inorganic compounds because the latter alter the former’s inner structure. This effect is widely used in sensorics, for instance, to develop temperature indicators. Carbon dots have a plentiful of functional groups on their surface that can interact with bacterial cell walls and thus rid the hybrid material of its fluorescence.

“We used fluorescent carbon dots to modify spider silk. The key property of these nanoparticles is their ability to emit light when absorbing energy. But they can also be used to detect pathogens, as interaction between the one and the other results in loss of fluorescence. Normally, when we expose our material to blue light, it turns red, but if it encounters a pathogen, it will stop glowing. With this technology, medical specialists will be able to say if a surgical cut is healing right. If a light testing shows that the material retains its fluorescent properties, it means that everything is going well; otherwise, there is an ongoing inflammatory process. Our material can be used to create subcuticular sutures,” explains Elizaveta Maltseva.

The authors of the study tested their hypothesis using some of the most common pathogens, including Staphylococcus aureus, Escherichia coli, and Candida albicans. The highest response was obtained during the second experiment. As a result, As a result, the intensity of light produced by the new material dropped by over 80% in 4-5 hours

So far, the researchers have thoroughly described the structure and properties of the novel material, as well as ran several experiments to estimate its biocompatibility and cytotoxicity. In the future, the team plans to study it further in order to figure out how long the new material can carry out its functions while in the human body. Apart from that, the scientists will also test in vivo how the material interacts with its environment.