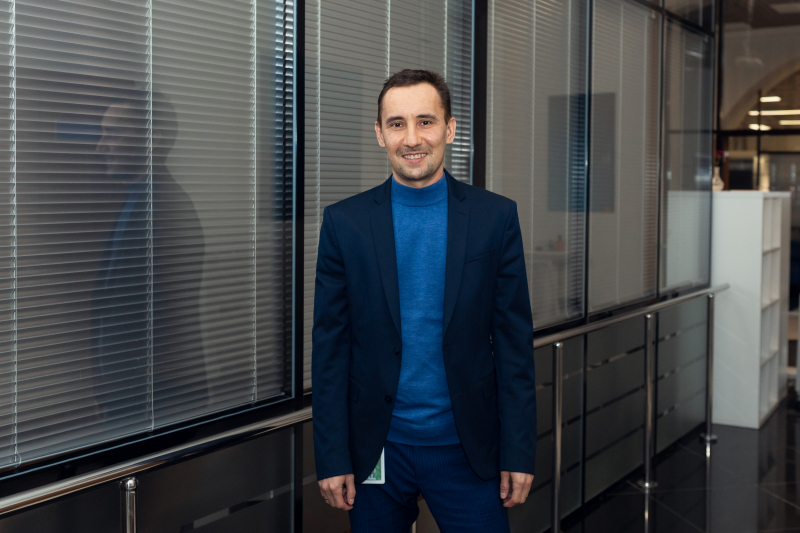 How did you get into human genomics?

I got my PhD in biology from Bashkir State University in Ufa but I didn’t have many employment options in the city. There was a research group that studied genetics and anthropogenesis at the Institute of Biochemistry and Genetics of the Ufa Federal Research Centre of the RAS and I joined its team. Then I continued to work with this topic as a postdoc at the Estonian Biocentre of the University of Tartu.

Later, however, I developed an interest in the way predispositions are formed to certain illnesses. I wanted to see the acquired knowledge applied in practice. For instance, we already know how the gene pool is formed and that one of its parts is related to predispositions to diseases that can be studied from an evolutionary standpoint. I saw this as a promising line of research.

Why did you decide to join the ITMO Fellowship & Professorship program and continue your research here?

Having spent several years working as a senior research associate at the Biocentre and the Institute of Genomics at the University of Tartu, I developed my own vision of the research I wanted to engage in. I’ve always wanted to assemble my own research team, however this idea would be harder to bring to life in western universities, as, for instance, not many students there venture into academia. I reasoned that there are more young researchers in Russia and I was not mistaken: when I joined SCAMT Institute, I was shocked by the number of people who wanted to pursue a career in science. That’s what I’d been looking for.

I would like to point out that ITMO’s approach to engaging researchers seems to be the best out of all other Russian universities. Within the ITMO Fellowship & Professorship program, the university invites international researchers and offers them a competitive salary. I can say for sure that I’d recommend this program to my colleagues.

When I emailed ITMO that I wanted to join the program, I got an instant reply and we started talking: I presented myself and my planned research to the head and members of SCAMT Institute. The interview was held in English – and I liked this, it means that scientists at ITMO understand that English is the language of science.

First of all, this means that the university can attract international specialists, who, once employed, can also participate in the recruiting process by evaluating projects and candidates. This way, we get international expertise. Secondly, ITMO offers a number of English-language Master’s programs, just like the University of Tartu, which helps prepare Russian scientists for international-level projects. It is often the case that great inventions are overshadowed because their creators can’t always present them in another language.

How do you organize the work at your lab?

ITMO is a university that develops IT, chemistry, and other fields, but human genomics, the core of my project, is a relatively new field and we will be building the lab from the ground up. For this we need computing equipment and equipment for working with cells: deep-coolers, thermostats, fume hoods, and so on. Some of this equipment is already available at the ChemBio Cluster but it is used by many people apart from me. There are some cell experiments that can’t be put on the production line because for each of them the equipment has to be cleaned with ultraviolet light first. Nevertheless, in September I announced the launch of the lab and recruited five students, who are now studying the basics of genomics and microbiome analysis.

Why is it important to study the genetics of autoimmune diseases and allergies?

In the past, antibiotics weren’t a thing and hygiene wasn’t maintained at a very high level, which caused people to die from lung, gut, and other infections or parasites. As a result of fighting all of these pathogens, our immune system was always on guard: a mutation in one of the genes increased the production of protective proteins – which accounted for more efficient resistance to illnesses. As a result, this mutation was positively selected, secured in the genome, and persisted through many generations of humans.

However, now the pathogen load is different: for example, we have treatments for different diseases and children are born in the sterile conditions of hospitals. As a result, the immune system has changed and the mutations that used to be helpful in fighting pathogens can now malfunction and attack our own cells. As evolutionary biologists, we know that genomes contain traces of evolution and we can reconstruct them. Using fine mapping, we want to find the mutations responsible for the adaptation of genes in the immune system and compare them to candidate mutations – those that we suppose can be connected to a disease. After that, we are planning to study the way mutations function in a cell, because we don’t know the conditions that cause their activation. In this case, we rely on experiments with cells.

What are the challenges associated with the fine mapping method?

There is usually a certain lack of understanding in the public at the news that a gene or locus was identified. What it actually means is that researchers have found a major linked region of the human genome that contains genes. What they don’t usually mention in the news is that we don’t know for sure which gene we have found and what mutation it contains. Now we have quite a lot of data and thanks to that we know that a certain disease, for instance, is connected to 40 genome loci and another one – to 50.

But the most important task is to locate the genes with mutations that cause a disease. That’s why for the last 15 years geneticists focus on fine mapping of those mutations that contribute to pathogenesis. When we complete this process, we will have to find out how these mutations work on the level of cells, so that later we would be able to use this information to create treatments for the associated illnesses.

You’ve mentioned that the laboratory plans to conduct some experiments jointly with the University of Tartu. Which tasks would you like to perform together with your colleagues and which ones – at SCAMT?

I’d like to work together with our colleagues from the University of Tartu on genome and bioinformatics-related sections of our research because they have the largest biobank and multiple genome data on diseases at their disposal. Plus, this collaboration will provide greater internship opportunities for our students.

Yet I hope that we’ll be able to perform cell experiments in St. Petersburg because it’s easier to do this in Russia. While it’s quite hard to receive access to biological data of patients in western countries, our scientists are only required to receive an approval from a research ethics committee and then everything is up to them. If you know some bacteriologist or doctor who wouldn’t mind taking blood samples so that we could isolate cells from the blood at the lab – the research is to happen. What’s more, Tartu is smaller than St. Petersburg and has fewer research centers on biology and virology.

Could you give us any specific examples of such studies?

For instance, I’m going to carry on the study of psoriasis cells that we began together with researchers from Bashkir State Medical University. The thing is, my close relatives and I suffer from this disease, which often causes other health problems, like diabetes, too. Because of that, I started to think about how my expertise in genetics can help me and other people. I could be a geneticist  and even have a DSc but what doesn’t really mean if I can’t use it to improve the lives of others? So, this research is also, so to say, my personal project.

Psoriasis is a common autoimmune skin disease that affects around 2% of people, with some of its variants triggered by streptococcal infection, among other causes. However, the relationship between genetic factors and triggers are yet to be studied. We assume that mutations associated with an increased risk of psoriasis stimulate a non-typical response of the immune system when encountering disease triggers. To test our hypothesis, we’ve put a trigger, i.e. a particular strain of streptococcus, in patients’ immune cells to analyze the response developed at the level of gene regulation.

That was the first phase of our cell study. The next step requires financial support, which will allow us to review the data that we got. Then, we will be able to fix those regions of the genome that were activated by the trigger. It’s well-known that genomes are packaged into proteins. Yet as some gene gets activated, DNA starts to unwind and open up. Hence, we obtain an open chromatin. We can cut this chromatin out, read it, and compare the data obtained to our predictions. This is how we’re going to find matches with candidate mutations. After that, depending on our results, we will think about what to do next.

We believe we’re likely to find target genes. Here, I’d like to note that 80% of candidate mutations we’re looking for come from the changes not in protein structure but in its expression. Its levels greatly vary. Let’s assume that mutations enhance the amount of proteins. Then, our task is to find a way to reduce and prevent immune response. There are several ways to do that. We can either reach out to our SCAMT specialists who design DNA robots or use ready-made products aka repurposing drugs that affect genes and redirect drugs. In other words, we will consider therapy strategies, and it won’t be easy since we have to make sure they are safe and deliver drugs accurately.

Is it a medication you take once or are we talking about a long-term treatment?

I think that if you’re living with the disease, you’ll have to take this medication for the rest of your life because it’s something you’re born with. It’d be a lie if I said that the treatment would solve your problem once and for all. But I’m confident that people who suffer from this disease will give a lot to have the chance to suppress its symptoms from time to time. I want to make sure that you understand that we’re not going to edit human genomes. That’s dangerous because methods that are used for this procedure, such as CRISPR-Cas systems, are not 100% efficient.

What other projects do you work on at the lab?

Together with our Master’s students, we’re studying the role of symbiotic microorganisms, that is bacteria and protozoa, that live on and inside the human body. These microorganisms are structurally similar to pathogens already familiar to our immune system. These are streptococcus, for example. Some studies associate intestinal dysbiosis (qualitative and/or quantitative changes in the gut microbiota) with autoimmune diseases. What’s more, the inflammation makes bacteria leak in the bloodstream, thus exacerbating the disease. We have symptoms but we can’t say when patients got sick. Could bacterial leakage and dysbiosis occur prior to any symptoms at all? To get the answer, we want to examine the genomes of all patients and people with no psoriasis using deep sequencing. It will allow us to say which stains can be found in the gut and why they are there.

With the support of the staff members of the SCAMT Institute’s 3D Printing of Functional Nanomaterials research group, Victoria Egorova, a first-year Master’s student at the ChemBio Cluster, is currently working on the design of the new pill. The capsule will then go through an in vitro testing during which it will be put in the environment resembling that of the intestine (in terms of viscosity, acidity, and other parameters) – and then we will test it on animals.