Organized in partnership with the International Sol-Gel Society (ISGS), the XX International Sol-Gel Conference was hosted by ITMO University on August 25-30, 2019, in St. Petersburg, the former capital of Russia.
Over 500 scientists from 55 countries took part into what was perhaps the best ever edition of the world's leading meeting in sol-gel materials science and technology.
"Next Generation is the motto of the this conference" said the conference's chair and head of ITMO University’s SCAMT Laboratory Vladimir Vinogradov opening the conference on Monday at Tovstonogov Bolshoi Theater after a concert held  by ITMO students.
Following, the greeting address of ITMO University’s vice-Rector responsible for international affairs Daria Kozlova, the two other members of the international organizing committee, Vadim Kessler and David Avnir, briefly explained the new approach followed to organize the conference.
"We asked leaders and recognized experts in the field" Professor Vinogradov added "what they think about the future of the sol-gel community and what career development pathways for young researchers they see.
"Likely we will not find all the answer, but we will open an ongoing dialogue that will continue well after the conference”.
The first plenary lecture was given in the splendid hall of the Tovstonogov Bolshoi Theater by Norway's Academician Mari-Ann Einarsrud who gave a remarkable presentation on aqueous deposition routes and characterization of thin inorganic oxide films.
A first photo album was made available by the organizers. Another photo and video album was published by Mario Pagliaro. 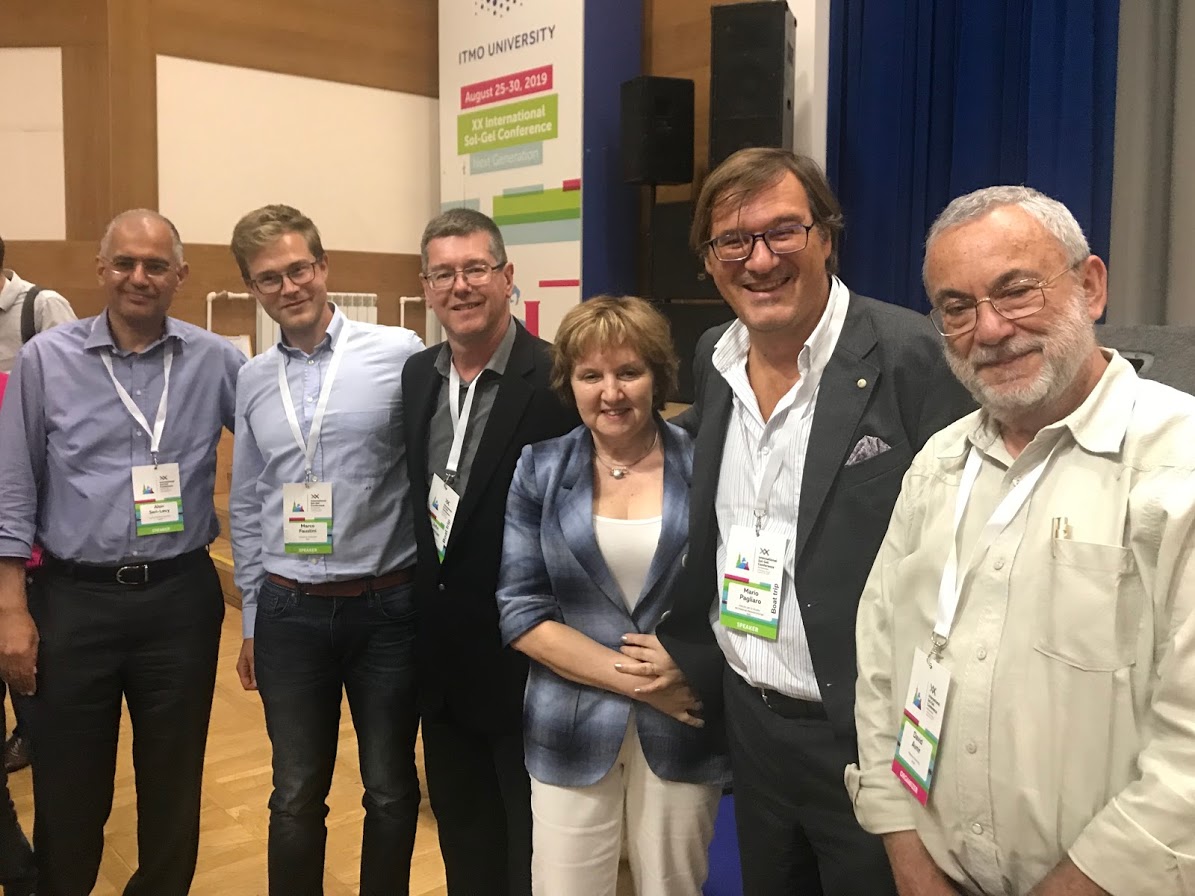 Beyond the traditional lectures and parallel sessions, the international meeting offered an hands-on workshop on aerogels on the very first day (August 25th) with eminent scholar and relevant entrepreneurs in the field of silica aerogels, and a science communication workshop as part of Science Slam, a new format where scientists present the specifics of their research during ten-minute presentations that resemble stand-up comedy gigs.
This was the first time the novel format forms part of the official program of International Sol-Gel Conference whose first edition took place in Padua, Italy, in 1981.
Supporting the next generation of materials chemistry scientists, the conference hosted competition for the best 100 MS and PhD students open for applicants under 25 years, offering free access to the conference, workshops and dorm accommodation.
Because of 2019 Sol-Gel’s focus on supporting young specialists in the field, the program underwent significant changes compared to previous years. Joining plenary reports by globally renowned scientists, which revolved around applications of the sol-gel method in 3D printing, quantum technologies, space engineering and other promising fields, and the Ulrich Award ceremony were lectures by students and panel discussions aimed at helping young researchers.
Entitled “How to build a successful career”, a most interesting roundtable discussion was held on the afternoon of August 27th during which young delegates feely asked questions to the five participants -- experienced scientists and representatives of the industry -- of the roundtable moderated by David Avnir Answering questions from the role of women in science through the importance of having clear and explicit objectives, offered advice and their personal insight on Eugenia Kumacheva, Mario Pagliaro, John Brennan, Alon Seri-Levy and Marco Faustini on how to achieve success in science and advanced chemistry technology.
The founder of Sol-Gel Technologies, Alon Seri-Levy, emphasized the importance of having a clear vision and the need to adopt core values as two key drivers for successful entrepreneurship. McMaster University's Professor John Brennan discussed the importance of collaboration and teamwork and how to transition into a leadership role to allow one to implement their vision. Professor Eugenia Kumacheva discussed how to balance successful career in science and family life, an especially important topic for women scientists who are also mothers. Sorbonne University's Marco Faustini discussed the key role of the mentors/mentee relationship, and the importance of networking at different levels to build a successful career plan. Italy's Research Council scholar Mario Pagliaro highlighted the need -- for a successful career in materials chemistry in industry and in the academy -- for a new and cross-disciplinary education involving also economic and management topics. "Today" he insisted "it has become crucially important to teach students and post-docs how to properly communicate their work, including the balanced use of the e-mail as we witness professors and students overwhelmed by time-wasting emails vastly exceeding the possibility to be properly managed".
Professor Faustini was also presented with the Donald R. Ulrich Award recognizing since the 1991 during the International Sol-Gel Conference outstanding contributions in sol-gel processes made by young researchers. 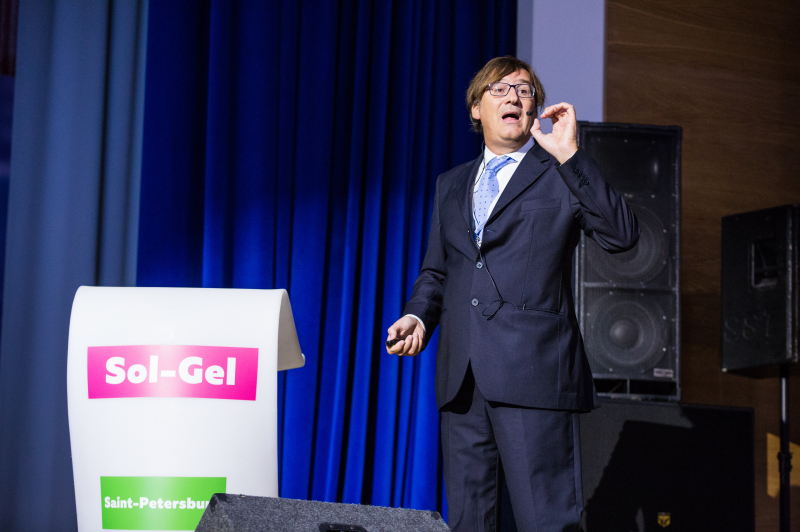 The conference saw the plenary lectures of some of the world's leading chemists and materials scientists. Ongoing merging of all chemistry's sub-disciplines occurred in the course of the 20th century was evident from the lectures of all the eminent scholars invited to present their research group's findings and personal insight in St. Petersburg.
Germany's Academician Peter Fratzl gave an exceptional talk on water-mediated forces in biological materials.
University's of Toronto and a Canada Research Chair Eugenia Kumacheva gave a presentation on bridging the gap between molecules and nanoparticles.
Russia's Academician Aziz Muzafarov shared new findings on hyperbranched polyethoxysiloxanes and related molecular nano-gels. ‘If you’d tell me that an ORMOSIL such as that prepared by Nakanishi" he said "could be reduced to less than 80% of its volume by simple pressing it and then return to its original dimension, I would have said: impossible. But there it is’
Austria's Academician Nicola Hüsing highlighted new routes to highly porous sol-gel materials by non-conventional sol-gel precursors and processes.
The Vice-Director at the Institute of Materials and Systems for Sustainability of Nagoya University, and aerogel pioneer scientist Kazuki Nakanishi presented new approaches in extending chemical compositions for broader applications of porous inorganic monoliths.
City University of Hong Kong Professor of Photonic Materials Andrey Rogach presented exceptional recent achievements with solution processable light-emitting colloidal nanostructures.
Harvard University's Professor of Materials Science as well as of Chemistry and Chemical Biology Joanna Aizenberg presented a host of remarkable results with sol-gel-derived inverse-opal structures for photonic, catalytic and sensing applications.
University of Melbourne's Professor and Deputy Director of the ARC Centre of Excellence in Convergent Bio-Nano Science and Technology Frank Caruso gave a wonderful lecture on advanced functional materials such as new metal-phenol particles obtained via supramolecular gelation.
Italy's scholar Mario Pagliaro gave a plenary lecture on sol-gel catalysts for synthetic organic chemistry.
"Our lecture" Dr Pagliaro said in a comment "paid special attention to today's young researchers and to their multidisciplinary background, offering a practice-oriented outlook on 30 years of successful research on sol-gel catalysts for synthetic organic chemistry".
"The invitation indeed recognizes scientific efforts which started in Sicily exactly 20 years ago". 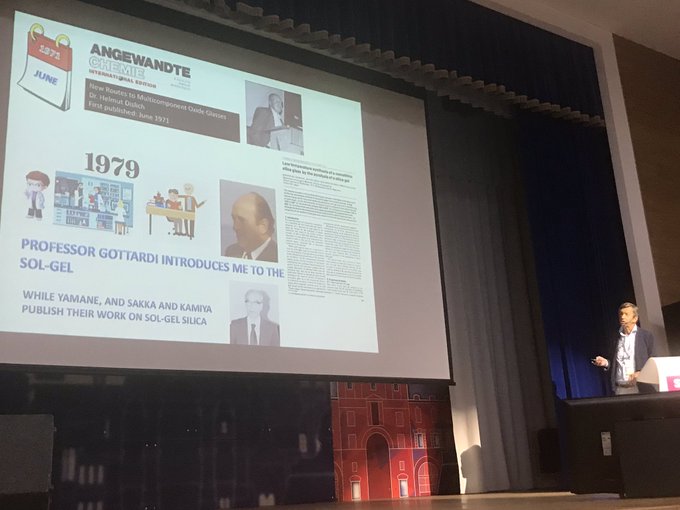 Professor Kazuyuki Kuroda, Waseda University,and Professor Massimo Guglielmi, University of Padova, Italy, were presented with the ISGS Life Achievement Award honoring the lifetime contribution of a scientist to enriching sol-gel science, whereas Professors Rui Almeida, Kazuki Nakanishi and Galo Soler Illia were appointed Fellows of the ISGS.
In their award-recipient lectures Professor Kuroda and Guglielmi gave fascinating accounts on the historic development of pioneer sol-gel science in their Labs.
Professor Guglielmi offered memories of when Vittorio Gottardi organized in 1981 Padova as a small meeting the very first international workshop on sol-gel derived glass later to become the international sol-gel conference- "Professor Gottardo was a glass chemist" he recounted "and was obviously fascinated by the solution chemistry route to glass.
"I was a young chemical engineering graduate" said Professor Guglielmi "and in 1979 Professor Gottardo had asked me to stay in his Lab, starting to work with Giovanni Carturan, who had already graduated there.
"We started a long series of studies on the fundamentals, such as the polymerization mechanism and the kinetics that are now part of all introductory texts to sol-gel science and technology".
Professor Carturan later on pioneered the sol-gel entrapment of living cells. How titania, and not only silica, can also be used to encapsulate living cells was discussed by South Korea’s KAIST Professor Insung Choi: "We started from Kessler’s work to encapsulate single cells using a new biomimetic method" and University of Birminghan's Dr Poologanunderampillai's presentation on glycerol-modified silanes enable to produce bioinks for 3D printing of hydrogels as a truly promising approach to make biotissues and bioinplant
In his award-recipient lecture Professor Kuroda recounted how the discovery of mesoporous silica was first reported in 1990 by Kato, Kuroda and co-workers in the Bulletin of Japan Chemical Society.
He then showed how Francesco Di Renzo, a scholar based at Montpellier's CNRS reported in 1997 the discovery in the literature of a 1969 patent in which American industrial researchers described exactly the synthesis of mesoporous (‘low bulk density’) silica prepared via the surfactant-template sol-gel synthesis.
"The only reason for which that patent did not become the foundation of mesoporous silica syntehtic strategies as it happened with our study followed by that of Kresge and co-workers", Professor Kuroda explained, "is they did not have TEM to visualize the mesopores".

Numerous other exceptional presentations were given at the conference. "I started research in sol-gel silica 30 years ago focusing on mononliths" said Nagoya's University Professor Kazuki Nakanishi. "Today we can fully control their porosity as it happens with those commercialized for today's chromatography, as well as with other porous oxides achieving similar exceptional control on the porosity".
"In 1997 I had no money, but a former PhD student from his group, I had the strong desire to commercialize this fantastic technology from David Avnir's Lab", said in his inspiring lecture on how to go from academic work to a successful sol-gel company Dr Alon Seri-Levy, co-founder of Sol-Gel Technologies.
Today the company is listed in Nasdaq stock market, and one of the most successful in the field of sol-gel derived products for cosmetic and pharmaceutical applications.
"A cream 5% in Epsolay, our silica-entrapped benzoyl peroxide" he explained recounting the story of the company "has been carefully tested in double randomized controlled trials for treating the symptoms of Rosacea. With excellent results".

Finally, during the conference breaks, Professor Alexander Vinogradov guided several delegate SCAMT Lab visit tours.
One surprising outcome discovered by visiting delegates is the number of new sol-gel derived industrial products developed by M.Sci. and Ph.D. students of the Laboratory already commercialized in Russia's market.
One of said product is antibacterial "Blokador", a sol-gel stabilized version of powerful oxidant ClO2, safely usable by consumers in place of vaccines, antibacterial and antiviral medications.
‘We provide formal and practical education on science communication to all of our students’ said Polina Khapaeva, Director for Development at the SCAMT ChemBio Cluster, o the audience of the conference, showing the effects of good communication of sol-gel science in what she called "the digital" in full analogy with a recent study on today's chemistry education in the digital era.